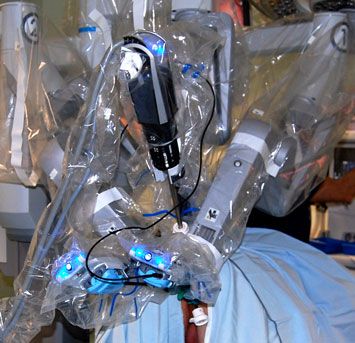 The classical operation for cancer of the rectum is an anterior resection and this is now most usually carried out by a keyhole or laparoscopic approach deep in the pelvis. However, especially in males this can be a very challenging procedure.

Supported by OCCTOPUS a team in Oxford is developing a protocol and procedure for robotic assisted anterior (RAR) resection. This is not novel – a handful of hospitals in the UK already offer RAR and are contributing to the ROLLAR trial aimed at establishing the value of the robot in this situation which is still controversial. The aim in Oxford is to become familiar with the technique enough to also accrue patients to the ROLLAR trial and to be best placed for further developments in robotic surgery.

A Word About Robots

There is only one clinical useable surgical robot in the world just now – the Da Vinci made by Intuitive Surgical. The patent is due to lapse in 2015 allowing the development of smaller and cheaper robots. Although the use of the robot – and by this we mean a master slave arrangement which mimics the surgeons hand movements and not yet any form of independent micromachine, is currently restricted, the principle has huge potential in the future.